Thank you to the rabbit for this discovery

Chinese dodder seed has been long used in traditional medicines to support fertility but contrary to the name of the seed, it does not have the super power of increasing your chances of conceiving a girl (read it out loud if you missed it). 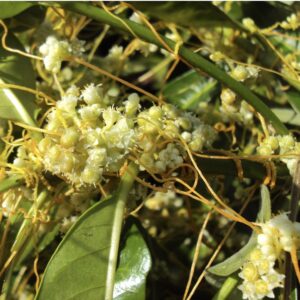 Typical with many traditional medicinal practices, a technique that was common of our herbal medicine forefathers was to observe what plants animals ate and when. In the case of the dodder vine, the rabbit is the animal credited for teaching us its medicinal benefit. The legend has it that rabbits with injuries to their lower back and hind legs would eat the dodder plant and then be able to hop along without pain.

Flavonoids and antioxidants are the primary biologically active components of the Chinese dodder seed that are most researched to substantiate the health claims that have given this plant its reputation. It has the effect of scavenging free radicals and opposing lipid peroxidation, regulating immune responses, prolonging cell cycle and being osteogenic.

It is very commonly used in Chinese herbal medicine formulas for treating fertility and reproductive health for men and women. It is one of the famous five seeds of Wuzi Yang Zong Pian (5 seeds for fertility support pill), which has been long used for improving sperm production, impotence, premature ejaculation, and frequent urination in men, as well as for supplementing uterine lining development and treating vaginal discharge in women.

In addition to its common usage in reproductive health, active compounds found in the dodder seed were found to be supportive for preventing bone density loss in post menopausal women. This was credited to its effect on increasing bone formation and reducing the bone degradation process. This must be the mechanism of effect in its originally observed usage for treating lower back and hip pain, likely when the pain is caused by weakness rather than a traumatic injury.

As a sign of gratitude for the rabbits that shared their medicine with us, the Chinese name for this seed is Tu Si Zi, meaning rabbit silk seed. The character and sound Tu si made up of the character for rabbit (兔) with the herb, or plant, symbol above (菟).